Scene One: Out Of The Depths

In Act Two, the individual characters worked slowly towards healing, but the larger forces of the unconscious represented by the two choruses did not change. By the end of Act Two, Matthew fell into an all-embracing awareness which will transform both choruses. 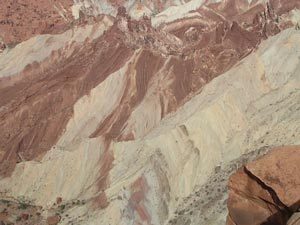 Act Three opens on a stark, bleak stagescape. The stars fade as dawn approaches. A single light barely illuminates the Patriarch. The rest of Chorus I is onstage as well, engulfed in darkness.

The spears they obtained in Act One have defended them well from the other chorus, but now they are caged in by their defenses. The Patriarch sings a deep, low, tired, despairing melody.

[Track Nine]
Gradually, his Planctus arouses the other Chorus members. One woman begins a repetitive lament, a simple, descending scale inspired by the music of Arvo Prt, and other singers follow. Real movement or transformation appears impossible. They clutch their spears tighter, even as their misery and sense of being trapped increases each moment. Gradually, as the music moves at an ever more glacial pace, they freeze into an uncomfortable tableau. 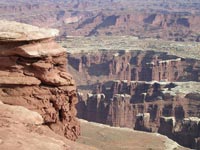 [Track Ten]
Matthew enters as the sun begins to rise. As he sings to them, they gradually loosen their grips on their spears, and look questioningly at the Patriarch. The women of the chorus encourage the Patriarch to accept this new presence. Matthew dances over to the Patriarch, puts his hand on the old man’s shoulder, and raises his other hand to heaven.

[Track Eleven]
Suddenly, a bell rings three times, and from the top of the stage three angels come to pay a visit. The Patriarch closes his eyes in denial for awhile as the first angel calls forth her melody and brings in her two assistants. The three angels dance through the air in circles around the Patriarch, pouring light into him and eventually into the other chorus members. Their work complete, the first angel calls her two assistants back to their realm, and all three of them float up and out of sight as the bells ring three times again, heralding their departure.

[Track Twelve]
Everyone is in awe. Matthew reaches his hand out to take the Patriarch’s, as if to say, “Arise and walk.” The Patriarch drops his spear to the floor, as do all the other chorus members. The stage is bathed in light as the Patriarch arises and moves with a new freedom. Matthew and the Patriarch sing together as if they were long-lost brothers.

Just as their rather serious duet reaches a climax, the chorus enters, thoroughly enjoying its new-found freedom. They sing an energetic, incredibly fast fugue, leaping delightedly about in pure celebration. 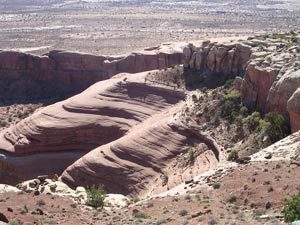 [Track Thirteen]
Camilla and Angela enter. At first, the chorus members aren’t able to accept them. They begin reaching for their spears once again.

Matthew intervenes, transforming the fugal melody of rejection to the healing melody of the three angels who had just paid their visit. He reminds the Patriarch and his followers that just as the angels had released them from their suffering, so too must they now release Camilla from the pain of their rejection of her. The Patriarch relents and finally embraces both Camilla and Angela. 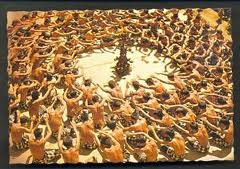 [Track Fourteen]
There is a frozen moment where the somewhat aging Jabez and his chorus look over Matthew and try to frighten him off. Matthew takes great elight in his costume and mask and macho bluff, and begins to laughingly imitate him. Soon, Jabez decides it would be all right to join in the fun, and the two begin their own dance of celebration.

The music which emerges under the chorus is in a completely new style. In this piece the octave is divided into nineteen equal divisions instead of the twelve equal divisions of our traditional tuning system. As a result, scales, chords and melodies are utterly different in 19-tone music than they are in 12-tone music.

As the dance between Matthew and Jabez comes to a climax, the other chorus members begin to join in. Immediately, we hear some of the rape music of Act One return, because that is the behavorial “track” this chorus is most used to. Matthew does not immediately try to stop this, but instead simply dances in a circle around the outside perimeter of the group, laughingly encouraging them to allow new movements to emerge within this energy. As this wildly exuberant chorus dances on, Matthew begins to circle them again. This time, he brings light down upon the foreheads of every member of the chorus. As he touches their foreheads one by one, the singers stop singing their “Shooka-Shookas” and start singing different notes of a chord as Matthew brings them the gift of harmony–and humanity.

[Track Fifteen]
A second celebratory dance ensues, this time with the chorus singing an actual melody. The members of the second chorus pick Matthew up and seat him to watch them dance for him. Members of the first chorus are sneaking in and grabbing their spears.

The second chorus, excited by their own dancing, begin singing to the dancer in the middle and encouraging her into ever wilder gyrations. She whirls about like a dervish in 24/8 time (9/8, 7/8, 5/8, 3/8), and soon the rest of the chorus joins her. The dancers enter a trance state where they are oblivious to the first chorus’s menacing presence. Matthew stands up and looks straight into the eyes of the Patriarch, who averts his eyes and calls on the members of his chorus to attack. 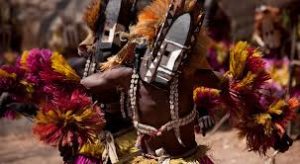 [Track Seventeen]
The Patriarch of the first chorus could learn to accept Camilla and Angela, but accepting the pure primal energy of the chorus who had actively attacked him in every encounter is too much. A terrible battle ensues as both choruses sing in a Shostakovichian style against one another, with Chorus II reverting to its monkey-chanting.

As the fight progresses, Jabez and the Patriarch are locked in mortal combat. Jabez has stolen a spear and is now fighting for his life. Matthew looks at the two of them. Music inspired by the final exalted lullabye of Bach’s St. Matthew Passion sneaks into the first chorus. Arms outstretched, a great light begins to radiate from within, and that same light begins to pour down from the heavens. Matthew begins to walk directly into the center of the fray. Now the angel of death enters, calmly singing from above. Matthew walks right in between the two men, arms still outstretched, just as the two lunge at each other with their spears. The spears pierce Matthew and plunge on through the other two men as well. Jabez and the Patriarch die immediately, but Matthew is still alive.

The choruses sing a tragic theme which first appeared in the first chorus of Act One, when the women saw the inevitability of having to bow to the patriarchy that was forming around them. Camilla screams, and pulls her son into her lap.

[Track Eighteen]
Matthew is dying, but the pain seems to be nothing to him. The music becomes quiet, like the slow movement of a Mozart concerto. Matthew sees only his angels, and even his mother is transfixed in the moment. Rather than Matthew being lifted into the heavens, the angels dissolve into his heart. A brilliant light radiates from him, then fades away as Matthew draws his last breath. This is the last we see of the angels. 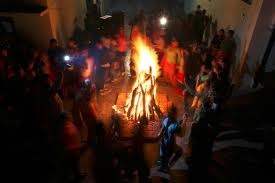 [Track Nineteen]
The radiant light which vanished from Matthew’s body now saturates the stage as the sun begins to set for the last time. Matthew’s death pierced the veil once and for all. Camilla sings a brief lament for her dead son. Matthew’s body is in her arms; for a moment we see a frozen tableau that makes Camilla and her son look like Michelangelo’s Pieta.

Both choruses join hands in a semicircle around the two. They could find nothing in common with one another but their love for Matthew. Now, they can do nothing but surrender completely into their grief, and nothing separates them. While they sing a Renaissance-style polyphonic chorus, Indian drums, sitar and drone play underneath them.

The young woman who danced so frenetically before this last battle now steps forward and holds Matthew’s hand. She sings an Indian-style lament along with the sitar, while the two choruses squat and bow their heads. Red flames surround her and the funeral pyre. Her dancing and singing become at once a raging denial of what has happened, and an indescribable ecstasy. At the climax of her fastest singing, the Renaissance polyphony returns in the choruses. The Hindu image of the purifying fire and the Christian image of the flames of hell merge.

[Track Twenty]
The fire heats up to a blinding white light as a flute intones a variation on Camilla’s brief song of grief, transforming it into a melody of compassion. Angela steps forward, and she and another woman from the second chorus sing a reassuring, simple lullabye. Camilla and another Chorus II member take over; now even in her sadness she looks more radiantly beautiful than ever. The four women together reach out again to the young dancer and another soloist from Chorus I, and the six sing the lullabye one more time.

[Track Twenty-One]
The flute returns, and Camilla’s motif of grief finally metamorphoses into the emanation of pure love. The chorus begins to sing the melody which first appeared in the Overture to Act One. The peace and stillness which was there in the beginning and in the silence between each act is now fully revealed to both choruses. The seven rays of light begin to descend to the stage, slowly approaching the dancers, gently landing on the heads of the members of two choruses.

The members of the first chorus enfold the members of the second chorus in their robes. A mist rolls in, and the bodies disappear beneath it. As the music continues with the sound of a soprano and violins ascending beyond the normal the limits of their ranges, the seven rays of light begin to rise, merging near the top of the stage into a single point of white light as the solo soprano and chorus sing a final all-embracing five-octave chord. The stars come out, and the point of light slowly floats into the firmament. The music fades into silence.

Dedicated to Papaji, Revealer of Light