Love Never Ends… …When I was a child, I spoke like a child, I thought like a child, I reasoned like a child; when I became an adult, I put an end to childish ways. Now we know only in part, but when the complete comes, the partial will come to an end. Now we see through a glass darkly, but then we will see face to face. -1 Corinthians 13

Scene One: Dances With Angels 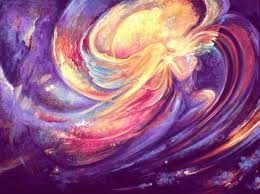 [Track Fourteen]
Matthew (the name means “gift of God”) is now a thirteen year old boy full of exuberant and hyperactive energy. The conscious memory of his painful beginnings has left him, but as his character develops, we see that he embodies elements of both polarities of the two choruses. Act Two opens with the boy asleep; his spirit friends come to visit him and they dance together in pure delight and joy. Matthew’s leitmotif is first heard by the flutes and recorders, then picked up and developed by the angelic soprano.

The pure leitmotif of spiritual grace flowing from the heavens to earth returns, and as the spirits begin their ascent, Matthew rubs his eyes and stands up as the sun rises behind him.

[Track Fifteen]
The deep wound of Camilla’s rape and rejection by her society have left her bleak and depressed. Matthew, in his youthful innocence, tries to cheer his mom up and and invites her to play with him. She retorts and scolds him, but he persists. His continuing excitement begins to bring up fear in her, and she repeats to him the leitmotif of pleading she first sang in Act One as her friends were rejecting her. The music degenerates from energetic consonance to a somewhat ominous dissonance. Camilla loses patience with her son and slaps him as we hear a milder version of the dissonant chord which appeared in the most tragic moments of Act One.

[Track Sixteen]
Matthew, confused and hurt, feels all his exuberance drain from him in an instant. He begins to sing his hurt to Camilla. The same dissonant chord rebuilds itself from the musical passages of the deep male voices, and Matthew begins to sing with more urgency, speed and desperation. Finally he is screaming at his mother, who is visibly shaken up by her son’s open display of hurt. A solo piano plays a plaintive melody and Matthew walks away, feeling hopeless and alone.

[Track Seventeen]
Camilla was not unmoved by her son’s outburst. Alone onstage, she confronts her own sense of isolation, despair and grief. She feels incapable of expressing love for her son.Her friend Angela enters, and continues to offer Camilla solace, but is met with fear and resistance from Camilla. Angela becomes impatient with her friend.

Camilla has been deeply moved by her own son, but Angela’s approach to her is less threatening. Her softening and compassion finally breaks through Camilla’s fears, and she begins to look directly into the eyes of her friend for the first time. The lights begin to dim as the intensity of their connection is felt. 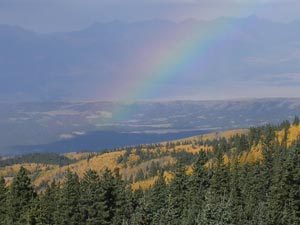 [Track One]
The two women touch hands as the solo flute intones a melody first heard in the Overture to Act One. The music, reminiscent of the “Liebestod” from Wagner’s Tristan und Isolde, builds to a climax and then fades down. Most of the music is harmonious, but there are elements of dissonance and pain which find their way to the surface as the energy builds and the love between them continues to burn away their suffering. Then the energy calms back down, and the two are left together, quietly entwined in a loving embrace.

[Track Two]
The music becomes extremely simple again, with Angela singing her love to Camilla over a single piano line. Camilla feels a little of the old fear returning, but does not pull away this time. Angela continues to offer her consolation and love as the music of their simple duet fades away.

[Track Three]
Scene Six begins with an extremely simple solo piano piece as the lights fade on Angela and Camilla and come up on Matthew.

[Track Four]
Matthew begins to sing of his loneliness. He begins a solo dance which expresses his sense of utter separation and despair. As he accompanies the trumpet, he sings his own redemptive leitmotif, now stripped of its most evolved qualities. His sadness turns to anger for awhile as the music gets a bit more agitated and somewhat dissonant. At the climax of his rage, he sings the theme we just heard of the love between Camilla and Angela; he wants love too, but as he is unable to find it, he slips back into the funereal music of the beginning of this scene. 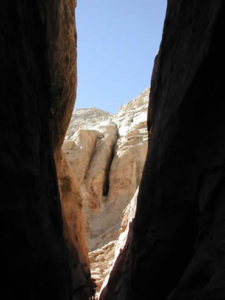 At this moment of greatest darkness, the sounds of ancient instruments replace the sounds of the traditional classical instruments, and Matthew’s friends from the spirit world are standing by his side. As the music builds around him, he is called upon to revive ancient memories and see the events that preceded his own birth. As these memories arise, the ancient instruments replay many of the traumatic themes of Act One. But now, they weave themselves together in a dance tapestry that is free of the emotional charge of the original experience. Matthew is seeing these events from the same perspective that his spirit friends see the events of earth.

Their dance is interrupted by the arrival of the cello, which plays Camilla’s motif of rising terror. Now the spirits huddle closely around Matthew as he sees just enough of the rape scene to understand what has happened to his mother and what the energies are that brought him into incarnation. The celestial harps intone his leitmotif as his friends turn him towards a white light in the distance.

[Track Six]
One of the spirit guides intones a new soprano melody, soon picked up by the orchestra as Matthew walks into the light. As the music swells, the brilliance of the rays intensify. Finally, Matthew dissolves into the light entirely. 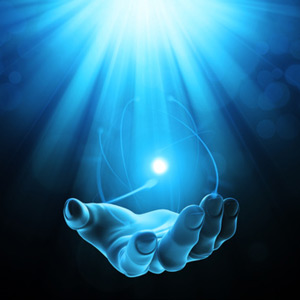 [Track Seven]
Suddenly, most of the light vanishes and we see Matthew standing before a magnificent sunset, struck with awe. This final brief musical passage is a simple prayer of thanksgiving. He sings a melody reminiscent of Puccini’s La Boheme, but this is a divine romance. The lights continue to dim and the stars come out as Act Two comes to a quiet close.