Composer Chris Mohr was 19 years old when he barely rescued a young woman from a gang-rape and confronted our “Shadow,” that which we reject in ourselves. The epic musical journey takes the audience on a journey through violence, trauma, healing, forgiveness, and finally that healing peace which even the most reprehensible acts cannot destroy.

A wordless two-hour music drama first recorded by the National Symphony and Choir of Ukraine and released on Naxos Records in 2001, received its first live performances in New York May 2-3.

Factions are at war. A woman is raped. A child is born whose radiance inspires healing and reconciliation. A hero’s journey, a woman’s awakening, celebration, a tragic loss. Will the factions come to peace?

See Video of The Shadow

of Sight and Sound

The Discovery of Healing Peace

Visions from The Archetypal Psyche

Autumn in The Garden

From The Realm of The Shadow

Stay tuned for updates to the cast and creative team! 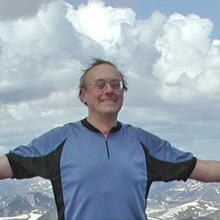 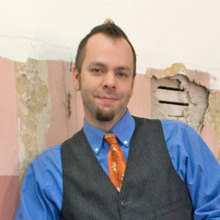 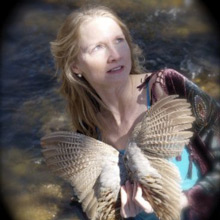 Self-taught Composer Christopher Mohr composed a full-length oratorio at age 17. At 26, he published a book of original piano music. Numerous chamber pieces and a cantata for his own wedding are among his other works. His musicals Ducktails and Bobbysox and Orphans in Candyland were published by Pioneer Drama Service and have been performed in all 50 states in the U.S., all ten Canadian provinces, and dozens of countries worldwide.

His LP recording, August Light, was released in 1987, played on dozens of classical radio stations and highy praised by conductor Antonia Brico. He has conducted excerpts of From The Realm Of The Shadow on several occasions, including a strongly-reviewed Colorado Symphony Orchestra concert in 1991. Mohr is curredntly working on the oratorio Melodies Of The Shoreless Sea, employing 53-note-to-the-octave tuning to replicate the original tunings of hundreds of ancient and never-before-heard scales.

Giving Voice Productions is committed to expanding the horizons and the definitions of theatrical form. It is our goal to “meet” contemporary audiences and create a space where pressing, raw, and relevant material can exist in an aesthetic of beauty and grace. We believe that this dynamic allows audiences to not only enjoy the theatrical event, but also receive and contemplate the subject matter.

Giving Voice Productions is committed to creating theatre from real and contemporary issues that are alive within the community. Through live performance and outreach efforts, we endeavor to inform, educate, entertain, and spark community discussion. Our performances are followed by in-depth talk-back sessions, which encourage the audience to be in dialogue with the artists and foster connections within the community.

Jeremy Williams is committed to excellence and innovation in the Performing Arts. He focuses on challenging and redefining the creation of new works, developing curriculum and pedagogy, as well as leading professional development of educators, artists, and audiences. His work as a Director/Choreographer has been seen across the country. He has led the creation of over 40 original productions spanning the genres of drama, musicals, concert dance, experimental theatre, and nightlife entertainment. He is the Founding Director (2008) of Convergences Theatre Collective, a national network of contemporary theatre artists and teachers dedicated to creating new work and revealing the artistic process for contemporary audiences- both live and online.

As an arts advocate and leader, Williams has consulted and coached numerous individual artists and arts organizations in artistic, educational, programatic, social media, promotions, and revenue/funding projects. He has been a leader in promoting and educating the field about Audience Engagement as a tool for artistic and business success. He has been a presenter and speaker for Engaging Dance Audiences, the national Dance/USA conference, Nonprofit Finance Fund’s Leading for the Future Initiative, and many webinars for the field in his capacity of Community Manager for GoSeeDo.org (formerly the Audience Engagement Platform). Williams is committed to creating, testing, learning, and sharing new models of business for artists and arts organizations to keep our work relevant and sustainable.

Composer Christopher Mohr was 19 years old when he was invited to join a gang-rape in his dorm. He rescued her, but the experience forced him into a confrontation with his own “shadow.” Over the next 20 years, his spiritual/musical journey unfolded into a discovery of that healing peace which even the most reprehensible acts cannot destroy. The wordless, all-vocalise choir and vast classical/folk/ethnic/electronic/early music ensemble intone melodies of haunting beauty as the story unfolds.

Factions are at war. A woman is raped. A hero is born. Is the light he brings enough to justify the violence of his conception? Could anything ever be enough? From the Realm of the Shadow is an epic story that confronts some of humanity’s deepest conflicts through sublime imagery in music and dance. The storyplays out in mythological proportions, but it is very much of this world. A heart-wrenching tale about a mother’s love for her child, and the destiny that awaits him. Singing, dancing, rejoicing, it delves into the heart of some of our messiest, darkest, most painful human truths. New choreography brings to life Christopher Mohr’s critically acclaimed, stunning score. A captivating journey to a realm filled with glory, honor, betrayal, and the battle between shadow and light.

Step into the shadow. Discover your own light.

Giving Voice Productions (Boulder, CO), Fractured Atlas (NYC) and composer Chris Mohr (Denver, CO). Featuring a team of outstanding actors, dancers, and designers, we will bring the opera, music and story to physical embodiment for live audiences in NYC and streaming online (“google opera”) for select audiences around the US as an opera (see our free opera downloads).

REVIEWS
“Chris Mohr has been able to combine visions from the depths of the archetypal psyche with original music of extraordinary evocative power.”
-Stanislav Grof, M.D., author of Psychology of the Future, The Cosmic Game, When the Impossible Happens, and The Ultimate Journey“Chris Mohr’s life-long confrontation with his own “shadow” has taken the form of a grand multi-media event… His music rises beyond the forms and styles he employs and… takes the listener on a journey from the most primitive to the sublime.”
– Micha Hendel, opera director“The battles between the light and dark forces inherent in the spirit world are approached in an appealing, unique and unusual way. Because of the rhythmic force… the work lends itself to a powerful dance, music and multi-media production”
-David Taylor, David Taylor Dance Theater“I love your music. It is beautiful, terrifying, sublime…too much for the consensual culture. What a contribution to true Self-Inquiry.”
-Gangaji

This workshop is the first step to bringing From the Realm of the Shadow to full stage production and we need your support. I hope you will consider making a tax-deductible donation to this project. It has been my life’s work as a composer and a true dream to see this work embodied and presented for new audiences in NYC and beyond!

You can help support this music drama by contributing online through Fractured Atlas. Your support will go directly towards “From the Realm of the Shadow”.

Write a check made payable to Fractured Atlas (a 501 (c) (3) organization) and mail the check to:

** Checks must be made out to “Fractured Atlas”. Checks made out to Chris Mohr, Convergences Theatre Collective, or Jeremy Williams must be returned.

“From the Realm of the Shadow” is generously supported by: